Tea Changed My Life - An Interview with a Tea Guru

Teabook founder Jeffrey McIntosh said that tea changed his life. “It didn’t just make it better,” he said. “It truly changed my life.”

McIntosh discovered the power of tea when he was in college and stopped by a small tea shop in town. “I had a lot of bad habits at that time,” he said. “In the first time in a long while, this huge weight was lifted off my shoulders. I quit my high-paying job, took a shift in the tea shop for about 6 months and went to China for two weeks. I went to the tea gardens there and had an incredible experience.”

McIntosh recalled his experience meeting a tea master, after which he decided to stay in China for six months. “I learned a new language and met new people,” he said. “That quality experience transformed my life. I had a more calm, stress-free lifestyle.”

McIntosh opened his own company shortly after, called McIntosh Tea, after discovering his true passion. “The driving force is tea,” he said. “I wanted to give as many people as possible the same quality experience as I had.”

McIntosh said he visits China, on average, three times a year. “I oversee every part of the tea process. I learned that tea doesn’t just come from a plant. It’s important to have the right region and the right process in place.”

He explained that different teas come from different regions in China. “The more I learned, the more I realized how difficult it was. No companies were taking the next step to build a partnership in China because of the cultural differences. When we opened Teabook after so many years, we wanted to provide an experience for anyone who was interested in loose leaf tea, without any thought or hassle.” 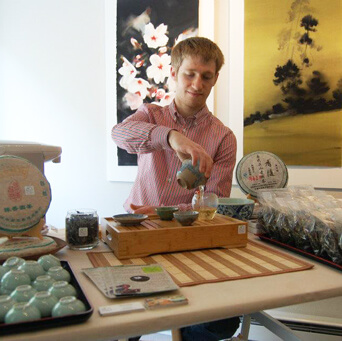 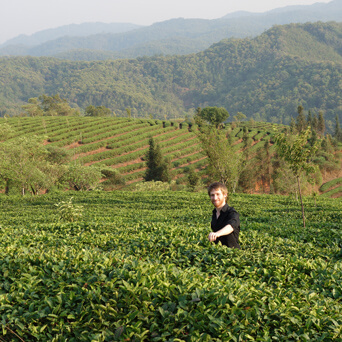 He said the goal is to show potential drinkers how the tea will fit into his or her life. “It would cost you a lot to get everything you needed to compare different loose leaf teas, so Teabook is a solution to that.”

McIntosh overcame the challenges that come with cultural differences. “I became fluent in Chinese and local dialect,” he said.

There are a number of factors that go into brewing a good tea, McIntosh said. “You need to consider the tea to water ratio, how long you steep it and what the water temperature is. All of these things are friction, friction, friction. They inhibit the consumer from experiencing tea.”

“With Teabook, we removed all of these friction points.  All of our teas are straight from the garden. They are fresh and high-quality and they are pre-measured for our tumbler, so the consumer doesn’t have to worry about over-steeping the tea. You simply add water.”
“We also don’t use strange names,” McIntosh said. “There are no standards in tea. We want everyone to have the opportunity to try quality tea.”

When discussing the tea industry in the United States, McIntosh said there were a few problems with it. “My biggest fear is that the industry will become a beverage industry,” he said. “They have no incentive for people to drink quality tea. I’d like people to slowly learn about it and understand why it’s healthful.”

McIntosh highlighted the biggest benefits he has noticed from drinking tea. “It clears your mind, which is very desired in this fast-paced lifestyle. It’s good for the metabolism and digestion. Tea has also always been known to prevent many diseases. That can be beneficial to almost anyone’s lifestyle.”

While McIntosh commented that each mood has a different type of tea, he does have favorites. “It’s all over the place, but recently I’ve been liking a lot of green tea. Mao jian is my current favorite. It’s not the most expensive tea and some people will say that it’s not the highest quality tea, but it’s so warm and comforting.” 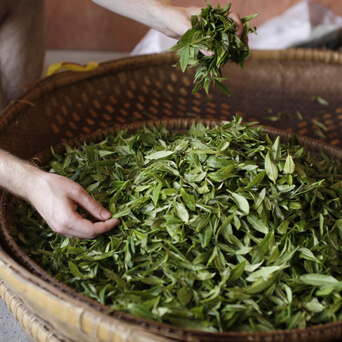 “The tea that I have the most experience with is pu-erh tea. It’s one of the few teas in the world that’s similar to wine. It’s picked from the tree, it’s air dried and it interacts with its environment as it ages.”

“It gets better with age and becomes more complex.”

Despite the unique properties of pu-erh tea, McIntosh said it would be difficult to introduce into the American market because of the complex process. “I do hope more and more people learn about tea,” he said. “There’s a lot of history behind it.”

To beginners, the amount of tea options may seem daunting. This is the problem Teabook is trying to solve, McIntosh said. He also recommended that beginners try as many teas as possible, because there is “no best tea.”

McIntosh explained the philosophy behind Teabook. “Every month it’s a subscription and we send you a new variety of tea from a different region. It focuses on the four main tea groups.”

“There is no standard in tea. As a new tea drinker, your best friend is experience. Each person will have their own likes and dislikes. Constantly be trying new tea and compare them side by side and that’s when you’ll learn so much.”

“Experience and learn about quality. Don’t get too hard-headed about teas and keep an open mind by trying as much as possible. There is such an unbelievable high-quality selection of teas.”

The culture of tea-drinking in China is one of the many things that influenced McIntosh’s development of Teabook and his desire to provide high-quality teas. “I’ve spent time travelling in Asia for the past seven years. The first time I went I was there for about six months.” 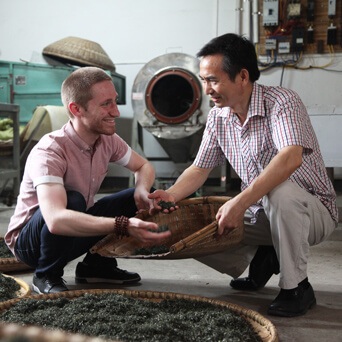 “I’m very close to all of our partners there,” he said. “I need to be able to talk to the farmers once a year and see what they’re doing. It’s important to have a connection with where the product comes from.”

“They have beautifully expensive teaware in China. There’s so much culture, history and understanding in this world of tea. The most important thing with tea as a new consumer is to be sure your tea is clean and free of pesticides or fertilizers. Make sure it’s affordable for you and it obviously needs to taste good.”

McIntosh said that loose leaf teas without blends have been around for over 3,000 years. “You can find a fantastic tea without spending tons of money.”

McIntosh also stressed that different teas suit different moods. “People drink coffee for certain reasons,” he said. “But there’s such a variety with tea. Tea helps facilitate great conversation. You can use it in the morning to wake up. You can be feeling down and reach for it to bring you some inspiration. You can develop a certain mindset with tea and develop a relationship with it.”

“Tea is so unique,” he continued. “I drink it for a number of reasons. It’s a comforting thing to do.”

McIntosh said that quality tea separates itself from tea bags. “They actually have a comfortable feeling that comes with loose leaf tea. It’s a unique component.”

McIntosh and Teabook’s relationship with Glasstic Water Bottle started after McIntosh began testing tumblers he found on Amazon. “I hated them all,” he said. “Then I found the Glasstic bottle and I thought it was very nice and sturdy and I knew whoever had designed them knew the story of their bottle.” 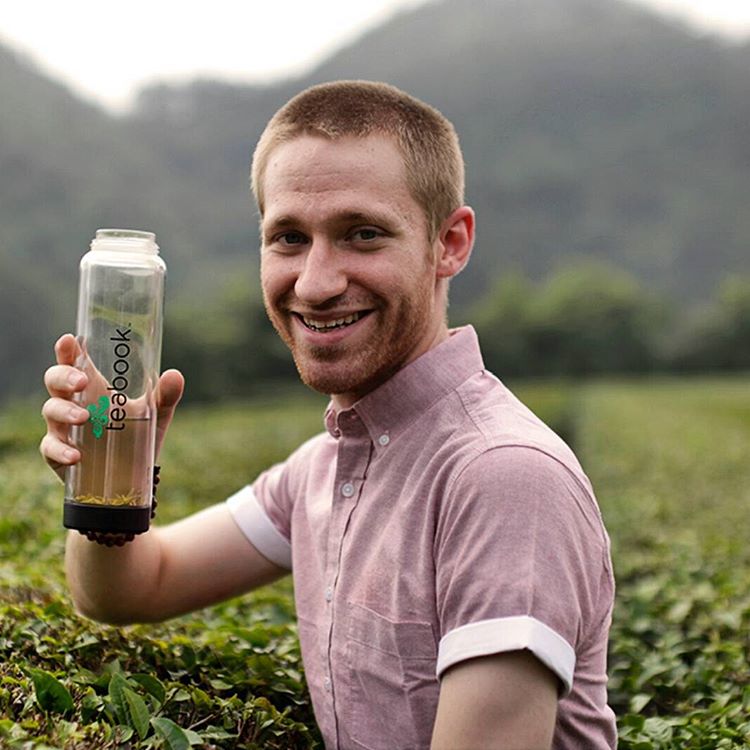 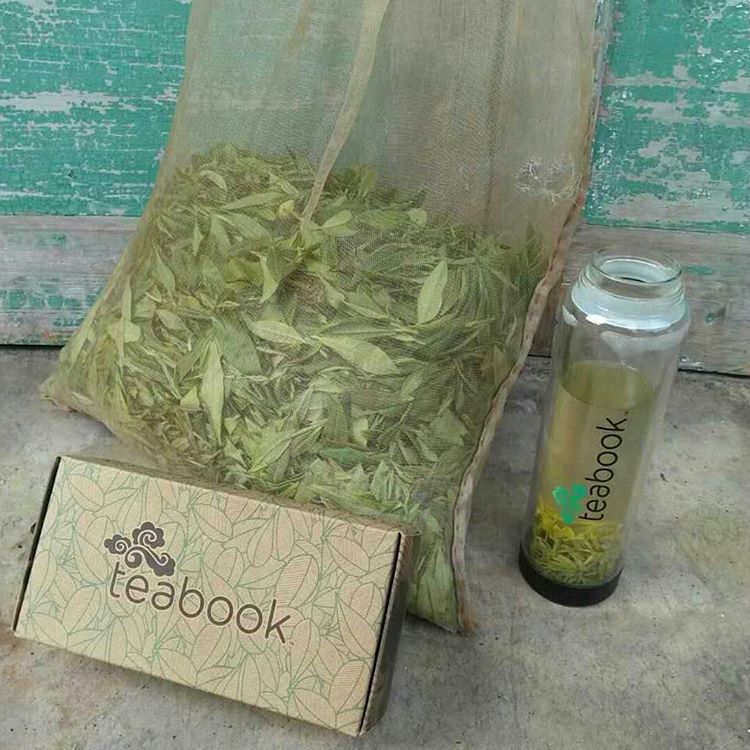 There was one problem with the Glasstic bottle. “It didn’t have a tea filter,” McIntosh said.

McIntosh came back to Glasstic as an option when a shipment of tea tumblers broke in the mail. “We ended up buying the Glasstic bottles wholesale. The product is well-made. I said that if there was a way to build a tea filter into it, I wanted Glasstic to be the go-to bottle for tea.”

“Teabook is opening a retail store and I decided it would be great to get each other’s product into each of our consumer’s hands.”

McIntosh said there will be a new tea filter in the Glasstic bottles and that Teabook will design tea portion packs that are a bit bigger and the perfect size for Glasstic.

“We’re going to do limited-edition runs of some very expensive teas. There are a lot of fun things we can do with this partnership and with our product.”

“We only offer our own Teabook glass tumbler and the Glasstic tumbler now,” McIntosh continued. “It will be a very nice partnership.”